Running of the bulls is bull s*** 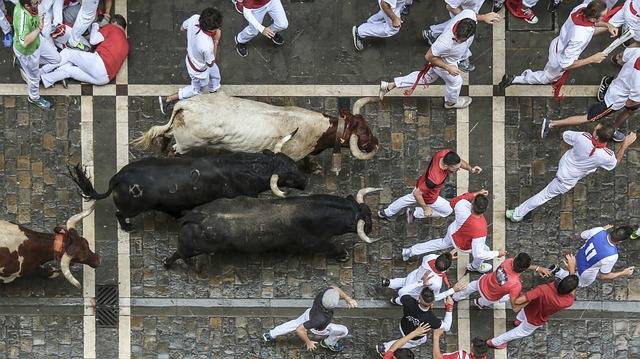 It’s that time of year again when Instagram will be packed with images of idiots running with bulls through the streets of Pamplona in Spain, just for the hell of it.

Some of them will be proudly sporting the injuries they’ve sustained in the chase, some will post photos of the irate bulls. I doubt many will post images of these poor beasts after they’ve been slaughtered following the cruel chase and the unfair fight they had to endure at the end.

If you hope one day to travel to Pamplona for the annual San Fermin Running of the Bulls, please read this article from PETA , which gives not one but 11 reasons why you should take this off your bucket list, then decide if you still want to go.

Last week I was offered an interview with 80s comedian Andy Smart who has taken part in 61 bull runs and will be running on Tuesday. This, despite having broken two ribs and having been carried by a bull at 30mph. Hilarious (not). Strangely, the press release didn’t mention what happened to the 60-odd bulls who featured in Andy’s ‘adrenalin-filled’ experiences, the PR made it sound like such good fun. Andy was keen to offer me some tips on bull-running she said. I’ve got one of my own: don’t do it.

I’m a hypocrite though, because – to my shame – I have twice ridden on an elephant, just for fun, and I’ve also taken my family to swim with dolphins, in a man-made pool, in Florida. No animals died for my pleasure, but still, I wish I hadn’t done either.

Both experiences were part of organised press trips and both left me feeling disturbed. It was horrible to see the elephants in Thailand shackled with metal chains and to watch their handlers steer them left and right by jabbing a metal hook into their ears. “It doesn’t hurt,” the handlers laughed when I cringed, but still… 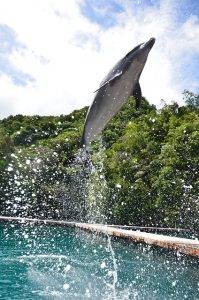 Worse was the swim with dolphins. Naively I’d thought we’d be swimming in the sea with wild dolphins, and I was taken aback when we arrived at Discovery Cove, which is part of SeaWorld in Florida, to find that they’re kept in a man-made pool. My son was reluctant to enter the water with them, not because he was afraid, but because he thought it was cruel.

At the time I thought it was one of the best and worst experiences of my life. I loved being so close to the dolphins – but yeah, I knew that it was wrong and when someone pointed out to me on Twitter that these dolphins had been forced into captivity, I realised she was right. I just hadn’t really thought it through before I went.

I asked the handler at Discovery Cove if the dolphins were ever taken to a larger enclosure and she claimed that ‘sometimes’ they were moved to a bigger area but wouldn’t give any further details. When I asked her if they wouldn’t be happier in the ocean, she said they were healthier and lived longer in captivity. Yes, but just because dolphins have a permanent smile, it doesn’t mean they’re happy, does it? I bet they’d rather take their chances out in the wild than living permanently in that pool.

Since I wrote this article, it’s good to see that Virgin Holidays has announced it will stop selling tickets to Discovery Cove, SeaWorld and Atlantis resorts in Dubai and the Bahamas, all of which offer opportunities to interact with dolphins or whales in captivity. Instead, it will focus on giving holidaymakers the chance to see these animals in the wild, at a distance. Three cheers for them.

Earlier this month there was a story doing the rounds about a British guy who was accused of organising ‘canned hunts’ in South Africa, where the animals, including lions and hippos, are bred and shot in captivity. No doubt readers were outraged, but how is this different to the running of the bulls where the bull doesn’t stand a chance any more than his lions, or forcing dolphins into a life of captivity so we can spend a few minutes swimming with them, just for fun?

There are lots of opportunities to enjoy animals in the wild but we should all do our research (see, I’ve learned my lesson) and make sure that the experience we’re being offered doesn’t harm them in any way. Otherwise, we’re not humans, we’re….animals.

If you want to get up close to elephants, I really enjoyed the Pinnawala Elephant Orphanage in Sri Lanka. It has attracted some controversy for chaining elephants, but if you’re worried there’s a good article here. And if you really want to swim with dolphins, you can actually do this in the wild in places such as the Azores, New Zealand and Australia.